Imagine an evening of Shakespeare in an outdoor amphitheater, watching the sun set over the Sangre de Cristo Mountains as you enjoy a family picnic on the lawn.

Shakespeare in the Sangres: Outdoor Theater at Its Best

WCPA presents a play each evening in our beautiful outdoor amphitheater behind the Jones Theater in Westcliffe, Colorado. Experience these Shakespeare productions in a repertory theater setting. Guests are encouraged to arrive early, bring blankets and/or chairs to sit on and a picnic.

One of Shakespeare’s most famous and beloved comedies, Twelfth Night tells the tale of Viola, a young gentlewoman of Messina shipwrecked on the shore of the fantastical country of Illyria. She disguises herself as a boy in order to gain a position in the court of Illyria’s ruler, the lovesick Duke Orsino. Here, her wit, her ingenuity, and her heart are taxed to the utmost when Viola finds herself falling in love with the Duke while being tasked with wooing the Countess Olivia on his behalf. Romantic intrigues, mistaken identities, danger, duels, high-flown witticisms and lowdown hijinks – whatever you will, Twelfth Night has something for you.
Included in Season Ticket

Arguably Molière’s comic masterpiece, written in 1666, the misanthrope of the title is Alceste, a nobleman so disgusted with the follies, vanities, and insincerities of his society that he’s become borderline boorish. Alas for the censorious Alceste, he is irresistibly attracted to the beautiful and frivolous Celimène, who embodies every social ill that he deplores, and whose flirtations and double-dealings with her circle of equally frivolous friends and suitors drive him to distraction. Can the Beast and the Beauty ever find happiness together? Come see The Misanthrope and find out!
Included in Season Ticket 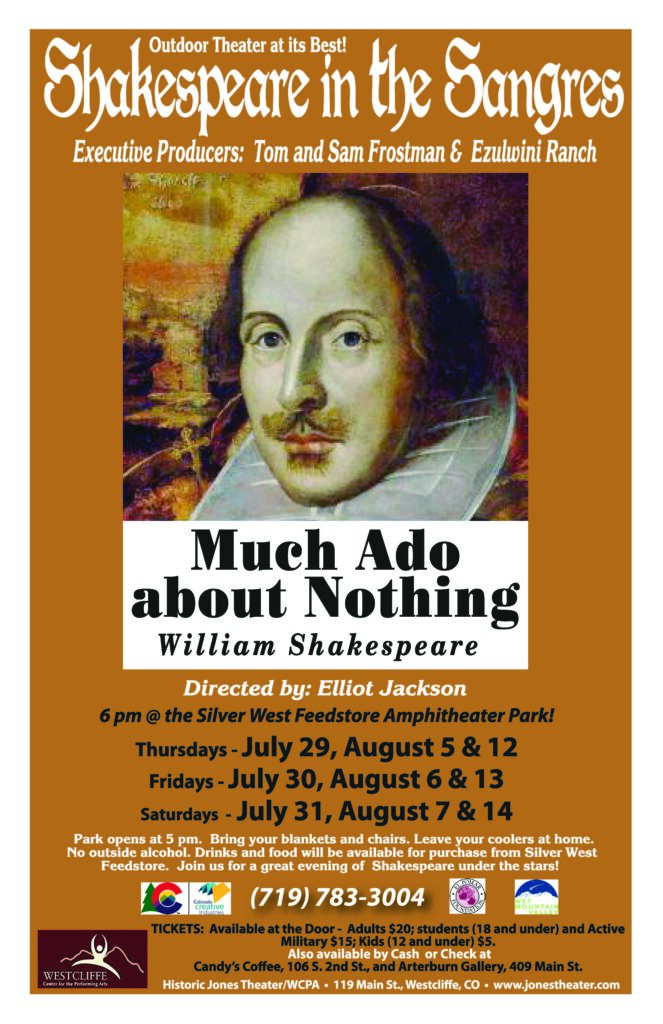 Shakespeare in the Sangres Festival
♦
Beginnings in Westcliffe, Colorado
by Chris Tabb

2007—The Tempest
2008—Romeo and Juliet and Taming of the Shrew
2009—Much Ado About Nothing and Twelfth Night
2010—Midsummer Night’s Dream and Macbeth
2011—Henry IV, Part One, and As You Like It
2012—Lady’s Not For Burning (Fry) and Measure for Measure
2013—Tartuffe (Molière) and Two Gentlemen of Verona
2014—The Imaginary Invalid (Molière) and Comedy of Errors
2015—A Midsummer Night’s Dream and Merry Wives of Windsor
2016—Love’s Labour’s Lost and King Lear
2017—Romeo and Juliet
2018—The Tempest and The Miser
2019—Hamlet and The Importance of Being Earnest
2020—Season suspended owing to Covid-19
2021—Much Ado About Nothing

The impetus for the Shakespeare in the Sangres Festival originated from a confluence of circumstances. In 2003, after ten years of producing live theater, Westcliffe Center for the Performing Arts (WCPA) at the Historic Jones Theater expanded the facility with the building of Studio 2. This addition provided the legitimate opportunity to attract talented college interns, professional actors, and directors, and thus to fulfill Executive and Artistic Director Anne Kimbell Relph’s creative vision of presenting live theater in this lively and enchantingly small Colorado mountain town.

I joined the WCPA while I was teaching for Denver Public Schools. As a Colorado native, I must admit that I had never heard of Westcliffe. With a summer off from teaching drama, I agreed to journey to Westcliffe and play a role in a production of “Bus Stop.” Returning each summer following, Anne and I watched the beautiful outdoor park develop on two acres behind the theater. Created by landscape architect Garett Carlson, the Amphitheater in the Park with its grassy lawn for audiences and its stunning views of the Sangres was completed that summer. We decided that the Amphitheater, with its rocky grotto as a background, would be a perfect venue for a Shakespeare Festival and that taking advantage of the grotto, the theater could produce The Tempest as its first production the following summer.

We started the festival with one production. Local actor Steve Miller embraced the role as Prospero in The Tempest. Standing atop the cave (a perfect venue for The Tempest) on opening night, a storm rolled in, just as Prospero called for. The production of The Tempest was a huge success.

We knew we had something to build on. From the success of Tempest, I called a meeting of the core actors and asked if we might commit to doing two Shakespeare plays at the same time and creating a festival. Everyone agreed. The next season we produced Romeo & Juliet and Taming of the Shrew.

Everything blossomed from there. Audiences were enthralled with both the venue and the product. With the addition of Dan Hiester, an award-winning director from Denver, the festival gained greater recognition. Dan is the “ambassador” of the festival, directing and acting in productions while he greets the audience in costume as they enter the venue.

Since then, we seem to reflect our elements. Producing outdoor theater presents many challenges. Thankfully, we now have sufficient lighting and sound. Yet, the venue, curtained at sunset, always provides surprises. On opening night of Macbeth, as the witches called for “toil and trouble” atop the amphitheater cave a windy storm brushed in as though actually summoned by them. We performed during the haze and smoke of fires nearby and anticipate performing for the Ride the Rockies destination folk in 2015.

While our Shakespeare in the Sangres Festival may be still small, our ambition remains large. Providing the opportunity for young actors to hone their craft as they conduct a Creativity Camp for aspiring youth reflects the WCPA’s commitment to the art of Theater and the community in which it thrives.

The 2022 Season
At the Historic Jones Theater
and Park Amphitheater

Save the date of June 17 for the Anne Relph Memorial Golf Tournament!

Our original online ticket sales provider, Diamond Ticketing, went out of business owing to Covid-19. The company has been purchased by AdventureTix, which will provide ticketing services. Other ticketing options are being pursued as well. Meanwhile, please contact the WCPA office at 719-783-3004 or by email (wcpa@jonestheater.com) for ticket information and sales.